When my Mister informed me that he was taking me to the mountains for our 25th anniversary, I had visions of hunting camp bouncing around my memory bank. Memories like; no electricity; meals I had to prepare in my long johns and mittens, laundry that piled up in the corner of our own little icebox camper; showers that could only be taken if we had enough change for the machine; and toilets with no doors. (Only the not-so-pleasant memories managed to surface.) When he told me that I wouldn't be needing my rolls of quarters or a frying pan, I was sceptical. And when he took me shopping for snow boots and ski pants, I was downright scared. The last time I wore ski pants was not a pleasant memory. There were ski's, screaming, a chair lift, more screaming, and a lot of children dodging bodies on the mountainside...it was positively frightening.

Then he said the magic words.

Private cabin with a 5-star chef. (Well, actually, he said "kid-free" first, just to grab my attention, but this one had more of an impact.)

Now that the reality of our return home has hit us upside the head, I thought I'd relive a few memories that my Mister and I made during our 25th wedding anniversary trip.

Well, not all of them...did I mention the Jacuzzi tub in our room? No? Well, never mind then...☺

Because of the recent snowfall, we had to be shuttled the 2.5 miles up the mountain.

When we arrived, the gas fire was on, music was playing, and wine was being chilled in the mini refrigerator.

Snow shoes and cross-country ski's were provided to the guests after we signed a waiver releasing the owners if we were injured on the trail.

Nothing strikes fear into me faster than a waiver.﻿﻿


The first morning, we headed up to a place called "Lookout Ridge". Had it just been a leisurely 2.2 mile walk on a nicely groomed trail during the summer, I probably wouldn't have hyperventilated.


My Mister is much more level-headed than I. He completes me. And I tell him "No!" when he starts to venture off the beaten path.

I guess I complete him too.


Next time one of us gets a wild idea to take a short hike, up a mountain, wearing a pair of snow shoes, I would really appreciate an emphasis on the "up the mountain" part of this idea. Before we get all of our gear on.

In case you were wondering, 2.2 miles up the side of a mountain, is a very long walk.

But so worth it when we reached the top!

Who knew that after worrying about being eaten by mountain lion's and bears (who may or may not have gotten the memo about it being hibernation time), that we would make the trek back up the mountain the very next day?
Day 2 took us on a 4-plus mile hike that ended early. This old gal just didn't have that extra half mile in her. There's something to that saying, "The spirit's willing, but the flesh is weak."

I'll do it next time.

We'll never know for sure, but I'm guessing I abstained because of the 1700 foot walk back up the sledding hill!﻿﻿﻿﻿

You know if the words "Basque Influenced" and "Compote Medley" are in the description, it's gotta be good.﻿﻿

After dining on 5 star food for several days, we asked the chef if he offered grief counseling before we left.﻿
Sadly, he did not. Sigh.

Don't worry, we're working through it.

With full bellies and exhausted bodies from playing in the snow all day, the evenings were spent relaxing by the fire in the lodge... 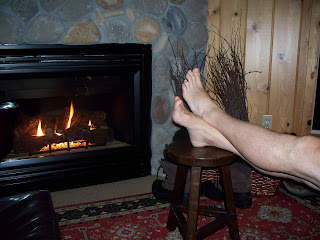 As the sun went down on our special trip to the mountains, I had to wonder, 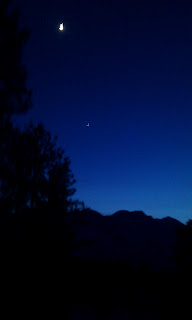 What a special and lovely anniversary trip! Thanks for sharing with us and NOT sharing the hot tub! ;-)

WHAT a FUN TRIP!!!! Sounds like a dream....would you be willing to share the name of the place you went to? I might have to try to plan a trip like that for our 25th! :)

Glad you had a good time and congratulations on 25 years!

Glad you had a wonderful time, but I also know you are glad to be home.a

YUP! We are empty nesters and the fun goes on and on! Our 5 kids always tell their friends that we don't miss them at all (and they might be right!)

Candy~It'd be a real shame to ruin one's first cup of coffee in the morning! :)

Valerie~We went to Mountain Home Lodge in Leavenworth. They have a website~ mthome . com (without the spam spacers!) The owners, Brad & Kathy, do everything to make the trip as special as possible~really wonderful hosts! You won't be disappointed!

Momma~Lana~Oh boy, I can't even think about being an empty-nester yet...don't want the kids to think I'm too eager!

So glad you had a great time!

Kim, Looks like a beautiful location! Thanks for sharing -- yes, this is what it feels like to be a grown up... how wonderful for your mister to whisk you away to such a relaxing place. :)

PS: I'm nominating you for the Versatile Blogger Award; stop on by my blog to see what it's all about and to pick up your award! 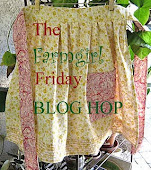 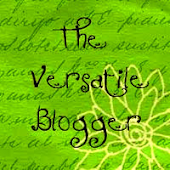